There is no other Spanish speaking author that has published so extensively in the competitiveness improvement / business innovation / business transformation/ change management field.

The books are described in the following three sections.

Almost all Rod's books are in the collections of E-Libro﻿. 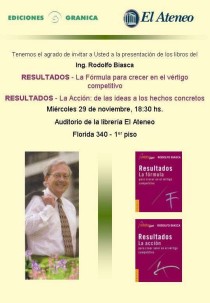 My most recent article

﻿This column has news from a variety of international sources and it is updated continuously.﻿

Weekly analysis and advice from the leadings minds in management. AUDIO.